Ever wanted to find out more about German music market? Our partners from Ostar Music Network prepared a short overview of it. Make sure to check it out before planing your export strategy to this country (cover photo).

According to IFPI’s Global Music Report Germany is on the 4th place of the world’s top markets of recorded music in 2021 (1st place goes to USA, 2nd to Japan). “There was growth of 5.1% in Germany, where streaming revenues increased by 24.4%. It was the first year that streaming contributed more than half of total recorded music revenues in the country. This reflects a trend from past years where Germany, as a rather conservative country in terms of recorded music, slowly is moving from CD and downloads to music streaming.

Looking at recorded music revenues based on genres in 2020 Pop remains the economically most significant genre with 26,6% of the overall revenue. With 18,6% Hip Hop / Rap is on the second places, closely followed by Rock 17,9%.

If you compare the revenue generated by national and international material in the Top 100 Singles and Long Players, despite a slight decrease compared to 2019 German productions are still highly popular.

On average people(actively using the internet) between 16 and 70 in Germany spent 19:43 hours on listening to music per week in 2020. Terrestrial radio is taking up over 40% of that time making it the most important source for listening to music in Germany. Second most important source is listening to stored digital music (13,4%), closely followed by premium streaming 13%. The Streaming percentage has increased to previous years. Taking a closer look at On-Demand-Streaming Premium streaming makes up 56,6%, Youtube 24,5% and Free Streaming 16,5%. 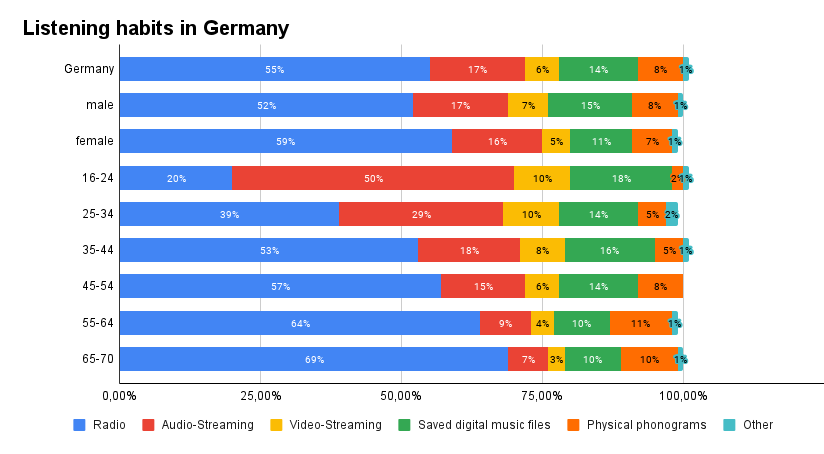 In terms of playing live shows and considering present media companies and music business companies Germany can roughly be devided in A, B and C cities (A meaning most important and so forth).

Live Market is very important the overall music industry in Germany. However it is also quite saturated with artists playing shows.  According to a study on behalf of Initiative Musik and LiveKomm in 2020 there are 2.000 venues offering live shows regularly resulting in 190.000 live events each year. This means 260.000 artists are playing shows each year. Of those artists every third one is considered to be a newcomer (75.000 artists). 80% of live venues have a capacity up to 500 people.

Tip: If you are an international artist considering playing shows in Germany one effective way is to find local artists who fit your style and approach  live venues together with them. By that the venue will be more open to booking you as there is a higher possibility of ticket sales.

Festivals are quite important for Germany. Rock and pop are the most important genres, but there are also quite some niche festivals like traditional music, jazz and celtic festivals. Here are some overview charts based on data from 2018

Tip: Most of the festivals start booking a year in advance and are highly oversaturated - don’t be late! 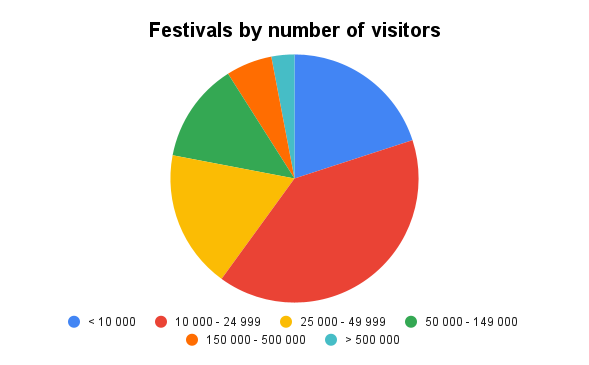